Jack Vance - The Man in the Cage 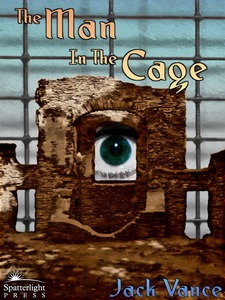 Junketing around the Mediterranean in petty smuggling operations, Noel Hutson liked to think of himself as a gallant adventurer. But in the middle of a North African desert kasbah, with a truckload of contraband, the American feels less and less like a swashbuckling hero. Forced to reload his truck with a very suspicious cargo, he writes to his family asking for help. Noel disappears, and his brother Darrell comes to find him. Darrell's search takes him to the ancient city of Fez, and into the desert- along the way meeting fanatics, beautiful women, and villains. An exciting suspense novel about an American making his way through a restless society of smuggling, murder, and North African politics. Winner of the Edgar Award, 1961.