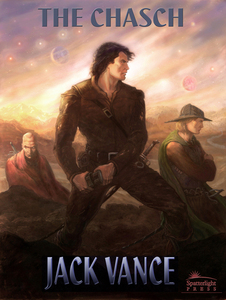 The starship Explorator IV is destroyed after entering orbit around the planet Tschai. Adam Reith's scout ship is en route to the surface when the attack occurs, and is damaged in the explosion; Reith crash-lands and is separated from his ship. He finds a world full of violence, where four non-human races rule: the Chasch, the Dirdir, the Wannek, and the Pnume. Humans are present, but dominated by the other races. In this volume Reith sets out to regain his scout ship, and makes his way to Dadiche, ruled by the Blue Chasch and their human servants. Along the way he finds loyal friends, and challenges social inequities with the same aplomb that he rescues fair maidens- like the lovely Ylin Ylan, Flower of Cath.

Tschai is a planet orbiting the star Carina 4269, 212 light-years from Earth. It is populated by three alien, mutually hostile species; the displaced, native Pnume; and various human races, some of whom live as slaves or clients of the aliens. Each of the four novels relates Reith's adventures with one of the species, and is named after that species.