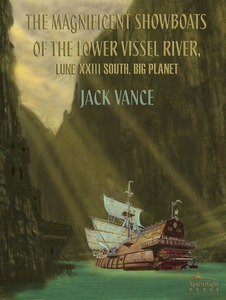 From Handbook of the Inhabited Worlds: "Big Planet lies beyond the frontier of terrestrial law, and has been settled by groups impatient with restraint: non-conformists, anarchists, fugitives, religious dissidents, misanthropes, deviants, freaks. Big Planet represents for us that tantalizing vision of the land beyond the frontier where bravery, resource and daring are more important than the mastery of urban abstractions. Who can deem this good or bad? Who can define justice, or correctness or truth? Big Planet is in essence a problem to which there exists no solution".

Shipmasters who run the magnificent showboats along the rivers of Big Planet know that each port has unique character and sensitivities. Apollon Zamp and Garth Ashgale are adept at dodging danger; two of the wiliest rascals in the business, they are deadly rivals to boot. When Zamp sets out to compete at the Grand Festival at Mornune, he knows Ashgale is never far behind!