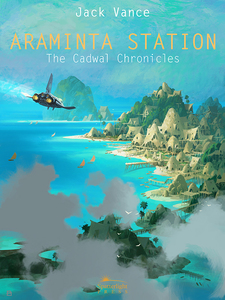 At the remote end of Mircea's Wisp, far out on the galaxy's Perseid Arm, is the Purple Rose System- containing the three stars Lorca, Sing and Syrene. Around Syrene swings the spectacular planet Cadwal, which the now defunct Naturalist Society of Earth long ago chartered to forever protect from exploitation. Cadwal is administered from Araminta Station- where young Glawen Clattuc wonders what the future may hold for him in the hierarchic, constrained society of Cadwal. His budding relationship with the lovely Sessily Veder ends with her mysterious disappearance- casting Glawen into a strange adventure, and the unraveling of a potent conspiracy.

Araminta Station is part 1 of 3 of The Cadwal Chronicles