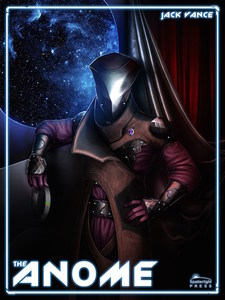 The minstrel Gastel Etzwane lives in Shant- a country of cantons, each independently dictating its own law and customs. The enforcement of law is simple, quick, and inevitable: death by decapitation, from an explosive torc clamped around each citizen's neck by authority of a single man- the Anome. For millennia Anomes have ruled Shant, dealing death as they see fit- and none dares defy them, until Gastel Etzwane risks his head to expose the Anome’s identity- and end the tyranny of these faceless men forever.

The Anome is part 1 of 3 of Durdane

The land of Shant on the planet Durdane is ruled by a purposely anonymous dictator called the Anome or Faceless Man. He maintains control by virtue of the torc, a ring of explosive placed around the neck of every adult in Shant.