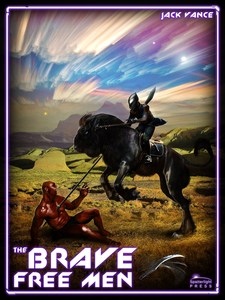 Where the Anomes once ruled stands young Gastel Etzwane, facing a mortal threat to his homeland. Hoards of red Roguskhoi, armed by an unknown enemy, have swarmed out of the southern bogs to slaughter men, despoil women, and spread waves of terror. Through the peace imposed by the tyranny of the Anomes, men of Shant have lost the art of weaponry and war. Now Gastel must revive those skills to forge Shant’s citizens into an army- an army of the free.

The Brave Free Men is part 2 of 3 of Durdane

The land of Shant on the planet Durdane is ruled by a purposely anonymous dictator called the Anome or Faceless Man. He maintains control by virtue of the torc, a ring of explosive placed around the neck of every adult in Shant.