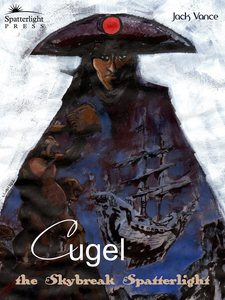 For the second time, Iucounu the Laughing Magician has magicked Cugel the Clever to the farthest reaches of The Dying Earth. Beset by thieves and schemers whose cunning almost equals his own, Jack Vance’s most incorrigible rogue must fight the long way back to Iucounu’s manse, where he means to exact a comprehensive and memorable revenge before the old red sun goes out forever.

SF Grandmaster Jack Vance weaves a picaresque tale of treachery, adventure, clashes of philosophy, moments of poignant irony, and a full brimming measure of humor that makes you wince, even as you laugh.

Cugel: the Skybreak Spatterlight is part 3 of 4 of The Dying Earth