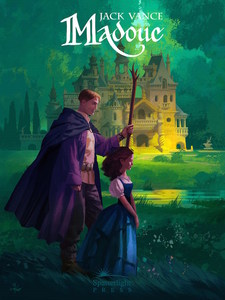 Wicked King Casmir cannot control Madouc, the wild and willful changeling secretly switched at birth with Prince Dhrun, rightful heir to the throne. So Casmir ordains a quest: whosoever brings him the Holy Grail will have Madouc for his bride. But the fairy-born princess chooses to decide her own fate, and sets out with a stable boy to find the grail herself. Meanwhile, a spiteful wizard seeks to undo the spell that prevents the war-torn Elder Isles from sinking into the sea.

The third volume in Grandmaster Jack Vance’s Lyonesse trilogy brings the epic tale of the Elder Isles to its magnificent and melancholy conclusion. Madouc won the World Fantasy Award for best novel.

Madouc is part 3 of 3 of Lyonesse