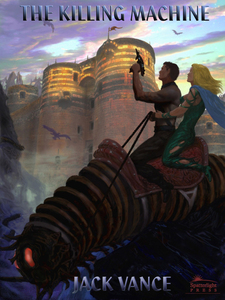 Having brought arch-villain Malagate the Woe to justice, Gersen now sets his sights on Kokor Hekkus, another of the Demon Princes. The name Kokor Hekkus, which means "killing machine" in the language of the planet Thamber, does not refer to Hekkus's own predilection for homicide, but to his fondness for horrific and murderous devices, including the giant robotic executioner that first gained him his nickname.