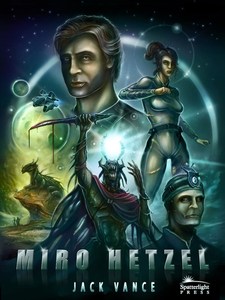 Time and technology will change the role of the modern literary private investigator. Rather than don a trench coat, engage in snooping, interrogation, prying, and producing disheartening snapshots, detectives of the future will by necessity command stealth and a variety of arcane techniques to satisfy their stingy and demanding clients, who seek results over interstellar distances.

Miro Hetzel is a special breed of investigator—an Effectuator, one who goes beyond mere fact-finding to produce changes in process and result, sometimes at the point of a gun.

Sir Ivon Hacaway, facing cutthroat pricing from a new competitor in the field of miniaturized electronics, employs Hetzel to determine the identity and methods of a commercial threat. On the trail, Miro is led to the hazardous planet Maz and the welcoming arms of the Dogtown Tourist Agency. Maz is the hub of uniquely overlapping sovereignties, where the interests of the alien Liss and Olefract intersect with those of mankind. The nature of Maz's heavily armed and easily annoyed native population—the warlike Gomaz—makes industrial pursuits on the planet improbable, a circumstance which puzzles Hetzel, whose investigations, close shaves, and discoveries make for an exciting yarn.

In Freitzke's Turn, Hetzel accepts a commission to recover purloined bits of anatomy belonging to client Conwit Clent. Clent is confident that the thief of his body parts is a certain Faurence Dacre—a schoolhood chum of Miro's, and now a surgeon of near-celebrity status. Dacre, it is revealed, has an unfortunate habit of reinforcing his self-esteem at the expense of others. Hetzel's pursuit leads us on a convoluted chase, and a resolution which involves a surprising twist of medical revenge.

All in a day's work for our self-effacing James Bond of several centuries in the future—Miro Hetzel, the Galactic Effectuator!