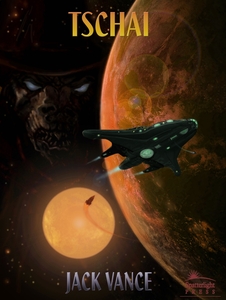 The four Planet of Adventure volumes chronicle Adam Reith's saga on the planet Tschai, under the amber glow of the star Carina 4269. Reith is a Terran first-in scout stranded on a planet which he learns is now occupied, after an ancient struggle which has come to a standstill, by three technically advanced cultures who now guardedly share the surface while the original inhabitants- the mysterious Pnume- dwell in subterranean depths. On Tschai, Reith discovers to his surprise (and disgust) Earth-derived humans whom the three off-world cultures imported long ago, who have undergone physical and perceptual modifications to closely mimic their masters. The enslaved humans retain however that most human of traits- ruthless self-interest.

In The Chasch, Reith encounters a handful of free humans ranging the face of Tschai, and begins his quest to secure a space-worthy craft with which to return to Earth. Resourcefulness is Reith's byword as his odyssey takes him among the domains of aliens, humans, and their various collateral societies.

In the final book of the omnibus, Vance introduces the Pnume, one of his most enigmatic and incomprehensible creations. Forced to live in the depths of Tschai by the long-ago surface struggle between the invading aliens, the Pnume have occupied themselves within an eternal obsession for collecting and preserving Tschai's historical oddities. Reith is horrified to discover that they seek to exhibit him in their Museum of Foreverness.

Jack Vance is at his best as he introduces the cultures and beings who make up the chaotic population of this ancient planet. Reith's path to return to Earth is thorny and fraught with constant threats. His epic tale is a masterpiece of story-telling.