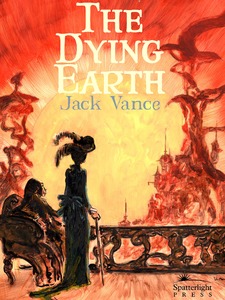 The Dying Earth Omnibus includes some of Vance's most influential work, including "Mazirian the Magician" (originally published as "The Dying Earth", a collection of six short stories "Turjan of Miir", "Mazirian the Magician", "T'sais", "Liane the Wayfarer", "Ulan Dhor Ends a Dream", and "Guyal of Sfere"), "Cugel the Clever" ("Eyes of the Overworld"), "Rhialto the Marvellous" (containing three short stories "The Murthe", "Fader's Waft", and "Morreion"), and "Cugel: the Skybreak Spatterlight" ("Cugel's Saga").

Ironic and darkly humorous, these stories are set in the far-future of our own world, where a depleted and decadent population waits for the blood-red sun to burn out and plunge the world into final darkness. A must-read for any fantasy reader.