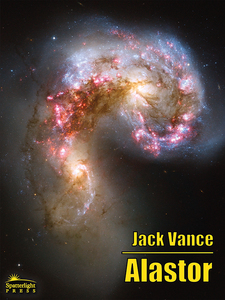 A whorl of thirty thousand stars ruled by the enigmatic and all-powerful Connatic, the Alastor Cluster is the setting for three of Jack Vance’s fast-moving adventures on worlds where our far- distant descendants have evolved strange and unusual ways of life.

In Trullion: Alastor 2262, former soldier Glinnes Hulden returns home to find his family property sold off. His fight to regain his ancestral land leads him amongst murderers, alien mermen, fanatical players of the team-sport hussade, and a star pirate hungry for a grand ransom.

In Marune: Alastor 933, a man stripped of his memory and sent off to a remote planet finds that he is heir to an aristocratic mountain estate among the Marunes, a society of warrior esthetes bound by complex, even absurd, cultural rules on a world lit by four shifting suns. But can he discover the enemies who tried to steal his title before they strike again?

Artist Jantiff Ravenstroke comes to Wyst: Alastor 1716 for the planet’s unique light and to experience its strange culture of enforced equality. Instead he finds himself trapped in a grim dystopia whose inhabitants lust for “bonter” – real food, not the state-supplied pap – and will go to murderous lengths to provide for their illicit feasts.